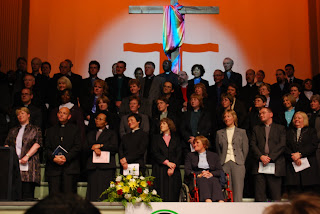 Getting right to the point, the service of Reception into Full Connexion on Sunday the 6th of July was wonderful and joyous.

Someone said to me about a week earlier that they had not thought about the impact of 'Reception into Full Connexion' on their ordination day and that the service had come as something of a surprise emotionally. I think for that reason I was assuming that it would be an important service and it was.

Conference attendees, along with family and friends of the ordinands, assembled in the main hall at Scarborough Spa before the service whilst those being accepted into full connexion gathered upstairs for prayers and last minute instructions. In addition to the presbyteral and diaconal ordinands, there were a number of ministers from other Christian churches (mainly but not always Methodist Churches abroad) who had already been ordained and were being accepted as ministers in full connexion with the British Methodist Church.

The reception was done in the context of a Service of the Word which was also the official Opening Service of Conference. The new Vice President of Conference, David Walton, gave the sermon on the topic of 'Choose Life'. It was a grace-filled sermon covering many aspects of what 'life' means to different individuals in different contexts and also dealt with the themes of grace and inclusivity.

I wish I had the text of the promises we made, but the general gist was that we accept the doctrines and disciplines of the Methodist Church and that we promise to be faithful disciples and servants of Christ and of his Church.
This was the last time that all the ordinands were together.  In the afternoon, we were ordained in groups of between 5 and 11 ordinands at different churches;  we were grouped according to our training institutions.  Some people of other traditions might see this service as somewhat redundant or unnecessary, but for me it expressed the fact that we are a national church where individuals are 'connected' to each other and not just lone congregations and individuals doing our own thing.  This 'connected-ness' is one of the things I'm passionate about in our ecclesiology (Yes, I'm passionate about Methodist ecclesiology - call me odd!)
(I have posted photographs of both the Reception into Full Connexion and the Ordination on the 'web but I don't want to give a link here.  Please email me and I will send you the URL for the photos.)
Posted by PamBG at 9:21 am

I'm so encouraged by this milestone in your life and ministry. And looking forward to hearing about it.

Thank you, Kathy. I hope to post soon when I catch my breath!

I always find the 'Reception into Full Connexion' very inspiring, whether I know any of the ordinands or not, so it is extra special when I do know someone.

Olive, I can see that it would be very inspiring even without knowing an ordinand. I hope that I will be able to attend such services in the future!