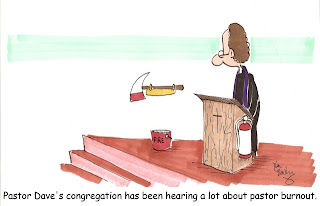 I think that there is probably something like "Laity Burnout" which results in people who are otherwise devoted to God either changing church communities or dropping out of church altogether.  I also think that Clergy Burnout and Laity Burnout are directly related to some of our fuzzy thinking about sin and boundaries.

Please don't think that I don't have sympathy for Laity Burnout - I do.  The problem with Clergy Burnout is that, because clergy usually make their living at what they do, they may feel more trapped than lay people feel.  Clergy also can't complain publicly about their experience the way that lay people can, that would be pastorally and professionally inappropriate.  I think many clergy also feel that they can't reach other to those within church structures who are assigned to give them pastoral care because then they would be seen as ineffective pastors.

Assuming that the clergyperson does have a genuine vocation to the ministry and isn't getting burned out simply because ministry is not their God-given vocation, I think that the number one cause of clergy burn-out is bad boundaries.

The problem is that the Church often inadvertently teaches that God wants God's followers to have bad boundaries.

Thus, we believe things like "God wants us to give money on a regular basis to the local neighborhood con artist" and we'll back this up with the biblical verse on giving to anyone who asks (Matthew 5:52) while we'll completely ignore the text that states that the person who refuses to work isn't allowed to beg from the community (2 Thessalonians 3:5-15).  We think we are being kind and loving and nice by giving money to the con artist but what we are doing is enabling them in their maladaptive behavior.

The problem for clergy is that congregations also often want the pastor to enable them.  Each and every one of us is addicted in some way to maladaptive behaviors and most of us will find changing these behaviors painful.

What is so exhausting about being placed in the role of Enabler is that the Enabler has to work significantly harder than everyone else to maintain the appearance of the community being dynamic and vibrant and whole.

As a small example, assume that 3 bible study group leaders drop out of their positions over the course of two years.  Each time Pastor Boundariless is pressured by his congregation to take over the role of leader and, at the end of two years, he has added a quantity of work to his schedule that is not nearly as insignificant as his congregation might think.  If you expect good quality scholarship at each class, it's not only going to take some preparation on the pastor's part, but it's also going to be a lot better if he's not exhausted.

There is also another way I think that the Institutional Church of many denominations is enabling the lay people who belong to them:  the myth that if the Pastor is a Really Good Preacher with a Really Good Strategic Vision, that new members will come flocking to churches.

There is a myth of Magical Thinking that all we have to do is be Genuinely Faithful and people will come flocking to our doors.  Of course, none of this falls as a "should" or an "ought" on the heads of the congregational members.  The "shoulds" and the "oughts" fall on the Pastor because "We are paying her" (to enable us in doing exactly what we want to do and to take the blame when our dysfunctions are found out).

Of course, at the end of the day, the only way to cease being an Enabler is to say "No" and to say "Stop".  That takes a lot of growing and a lot of courage, particularly if the prevailing theology of your community has it that being an Enabler is being A Good Christian and that refusing to exhaust yourself by trying to do the impossible is Being Selfish and Sinful.

Ultimately, as Christians, we need to get our theology straight about boundaries.  That doesn't mean we won't have disagreements about where the line in the sand should be drawn.  But hopefully, we won't argue that the act of drawing a line in the sand is unChristian.
Posted by PamBG at 5:49 pm 5 comments: