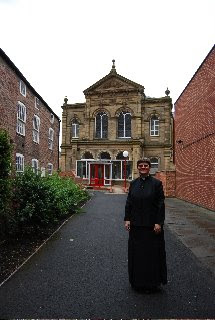  
Along with four other ordinands who were trained at Wesley House, I was ordained as a Presbyter '..of the one holy catholic and apostolic Church of Christ' at 4:30 on Sunday the 6th of July 2008 at Toll Gavel United Church in Beverley. Past President of Conference Ian White presided and past President of Conference Inderjit Bhogal preached. For those who know Inderjit Bhogal, it was hardly surprising that he preached on justice, inclusivity and interfaith dialogue: a message that my non-church going husband appreciated very much.

One of the scariest bits of the ordination service for the ordinands comes early in the service when the congregation is told to declare 'they are worthy'. This is something that is hard to hear because, of course, no individual is 'worthy' of any kind of ministry in and of themselves, but only through the grace of Christ. This sounds overly-pious as I write it, but one thing that came home to me on the retreat is my own inadequacy for this office and how much I genuinely need to rely on the grace and power of God in order to serve God and my neighbour.

The laying on of hands happened after the sermon and the recitation of the Nicene Creed and before the prayers of intercession and communion. We were asked to declare our lifelong commitment to ordained ministry, to affirm scripture as revealing all things necessary for salvation through Jesus Christ, to affirm that we believe in the doctrines of the Christian Church, that we accept the discipline of 'this church' and that we will be faithful in worship, prayer and in receiving Holy Communion.

I was officially ordained by past President of Conference Ian White - who represents the entire Connexion in this service. I had hands laid on me by a Bolivian bishop and my assisting minister and friend, Mark. Hands were laid on the five of us whilst we knelt and it was done carefully and thoughtfully - not a rushed job! I had my eyes closed, but it was a moment that I will never forget for the rest of my life. Perhaps the most special bit was the fact that, after having hands laid upon me, Ian White put his hand on my shoulder and said 'Bless you' as a father might have done to a beloved daughter; it felt very personal and warm.

Following the laying on of hands, close friends and family of each ordinand came up to the communion rail and took communion with 'their' ordinand; this was also very special.

As you might expect at a Methodist service, there was lots of rousing hymn-singing. The traditional ordination hymns as laid out in The Methodist Worship Book were sung as well as a number of more contemporary hymns and songs during the distribution of communion. My two Roman Catholic friends who attended the ordination had not heard of the Methodist reputation for hymn-singing and were somewhat surprised - albeit pleasantly, I think.

Just like the service of Reception into Full Connexion, this was a very special service. The whole day felt joyful and perfect and, personally, I enjoyed having the two very different sorts of services.

(I have posted photographs of both the Reception into Full Connexion and the Ordination on the 'web but I don't want to give a link here. Please email me and I will send you the URL for the photos.)
Posted by PamBG at 9:22 am

Can we use this holding page to say how delighted we are that you have been ordained and to offer our congratulations, prayers and best wishes.

Actually regardless of whether we are allowed or not I am going to do so anyway.

It was a great privilege to be present at your Ordination, Pam, and to feel a small part of it as we chatted in your car before and after the service and to share a mealwith you and your assisting Minister, Mark, on the way back.It was a very special day for me too. I was also very moved by the Chinese family (of all generations) who took Communion with the Chinese Ordinand. Your ordination service was definitely the highlight for me at this year's Conference.

Have you seen Will's post on Ramblings of a red Rose on the anniversary of his ordination last year at Blackpool?

Fat Prophet, thank you for your blessings. A lady came up to me after the reception into full connexion and said that you had sent your greetings via her - so message delivered!

Olive, I'm so glad that you enjoyed the ordination and our meal together. It was nice for the three of us to have that time together. Thank you for sharing the day with me. :-)

I did see Will's post on his first anniversary; I sent him an email with my congratulations, so it's not on the blog. I think it's a good think to take stock on the anniversary date and I liked what Inderjit said about attending an ordination every year as a reminder - although I don't know how practical that will prove to be!

I was impressed with Ian White's "When the going gets tough, remember that laying on of hands."

Reading your account reminds me very strongly of Methodism's Anglican roots as your ordination sounds very much like one of ours. But we could do with some of your singing! I swear, if I hear 'St. Patrick's Breastplate' one more time at an ordination service, I'm going to blow a gasket!

The Anglican Rector in my town came to my ordination and he said that the two services were very similar but yet very different (he'd just had a curate ordained the previous Sunday at Worcester Cathedral). Our patterns of worship are actually very much the same, bar a few differences.

We don't sing St. Patrick's Breastplate, though! The traditional hymns for a British Methodist ordination service are: Ye Servants of God, The Saviour When to Heaven he rose (http://tinyurl.com/6o7dbl), Come, Holy Ghost, our souls inspire, Lord Enthroned in Heavenly Splendour and O Thou who Camest from Above.

Many congratulations Pam. Only sorry I was not able to be at Beverley as I was at an ordination at Bridlington. What a fantastic day!

I wish I'd known you were at Conference and we could have introduced ourselves. Thanks for the congratulations. It was a great day all around.

Pam, I confess it has been awhile since I visited your blog. Congratulations! Hooray!