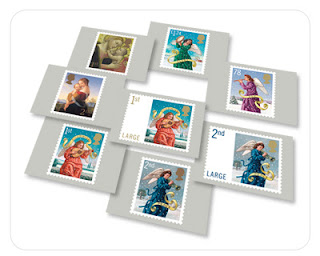 So today whilst at the post office, I told the lady behind the counter about the rumour and I asked if this was true. She looked at me like I was mad and then rolled her eyes and said 'Honestly, I don't know how people come up with this stuff.' She went on to explain that businesses sometimes don't want Christmas stamps but that she 'could usually tell' if someone was buying stamps for business or personal use.
She stated that staff do offer Christmas stamps to people during the holiday season but that they will say 'It's Christmas stamps, is that OK?'
As Christians, we are supposed to be interested in truth. It serves no one to spread these kinds of rumours.
Posted by PamBG at 12:56 pm No comments:

My 'Inner European' is apparently Italian. Quite appropriate for someone whose paternal grandparents were born in Italy, I think. Although I suspect that my love for all things carbohydrate may have had something to do with it!

I've not blogged my sermons for awhile and I've just done some catch-up on my sermon blog.

Today's sermon was for the festival of Christ the King and it can be found: here
Posted by PamBG at 5:11 pm No comments:

A Free Sample of the Gospel

First, I should acknowledge that I've not blogged about the sad death of evangelist Rob Frost, Methodist minister and founder of Share Jesus International.

I don't normally blog about 'news items' and I find it hard to craft a suitable post in this instance. Rob's death at the age of 57 is obviously tragic. He was a visionary, a called and gifted evangelist and I know that his ministry touched the lives of thousands of people. I'm sure that all Christians who knew of his work were sad to hear of his untimely death. How can one not mourn such a loss?

The Share Jesus International website gives some information about Rob's last days as does President of Methodist Conference, Martyn Atkin, in this post on the blog he shares with Ruby Beech, the Vice President of Conference.

I was really struck, however, by Martyn's tribute to Rob Frost in this week's edition of The Methodist Recorder. Martyn said that:

...(Rob) was an effective evangelist - a "free sample" of the Gospel rather than a salesperson.

I can't think of a more wonderful tribute to any Christian life.

May Rob Frost rest in peace and rise in glory and may his family and all those who mourn him be comforted in the knowledge of the Resurrection.
Posted by PamBG at 11:35 am No comments:

Oh dear, this gets complicated. Sally tagged me with a meme started by John Smulo.

Here are the rules:

1. Write down five things that you're thankful for.
2. Tag five friends who you'd like to see participate in this meme.
3. (Optional) Include a link to this post and encourage others to place a link to their completed meme in the comments section of this post so we can keep track of the thankfulness running around the blogosphere.

OK, so here are five things I'm thankful for:

1) Health. I don't mean to sound corny, but the older I get and the more I see and hear of people in pain and distress from health problems, the more thankful I become for my health.

2) My husband. What do you say without sounding corny? We were married late and have only been married 15 years versus some friends 25 or 30 years, but we are a fantastic team.

3) My ministry. What do you say this without sounding arrogant? This is a 'second career' for me. Being a minister of word and sacrament was not something women did when I was growing up. It's an awesome thing to be called to and it's a wonderful privilege to be able to do it in mid life.

4) Friends. No really. We see God in the people around us and we feel his love by giving and receiving love.

I don't really like tagging people. Please feel free to do the meme yourself and post your thankfulness on John's blog.

My better half is growing a moustache (no comment!) for 'Movember' in aid of Prostate Cancer. 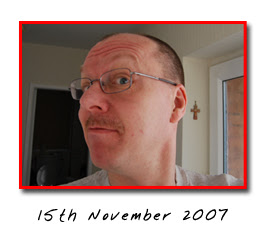 You can sponsor his moustache by visiting his website here and following the instructions.

I generally try to keep away from commenting on the issue of whether or not homosexual acts are in and of themselves sinful. Mainly because, as I've said before, I don't think that this is a gospel issue that should split the church.

Conservative Anglicanism is shooting itself in the foot theologically by - ahem - getting in bed with these bishops; it's indefensible for a Christian to advocate such action. The people in Jesus' time thought that lepers and prostitutes were a dangerous threat to society and Jesus touched them and ate with them. Christians simply cannot hide behind purity laws to justify such beliefs.
Posted by PamBG at 1:54 pm 12 comments:

I've been dipping into The Practice of Pastoral Care: A Postmodern Approach by Carrie Doehring. This is a book mainly about pastoral care but, in the book, Doehring defines three theological stances: pre-modern, modern, and post-modern. These are but illustrations to understand the different stances.

A pre-modern pastor would try to help a grieving Christian over the death of a loved one by defining the deceased's life in terms of an 'objective' soteriology and prescribing the mourner's response. If the deceased meets the criteria for 'being saved', the instruction is to rejoice in their salvation. If the deceased does not meet those criteria, the mourner is instructed to look forward to their own salvation.

A modern pastor would use the tools of biblical critical methods and systematic theology as well as the tools of counselling and psychology. This is a reason-based approach.

A post-modern pastor would try to understand how the mourner's perspective is unique because of a myriad of factors, including life experience, gender, race, class, age, etc. The pastor will help the mourner to find his or her own religous meaning in the context of this particular death.

Putting the idea of 'postmodern theology' in the context of pastoral response was something of a revelation to me. One of those 'D'oh!' sorts of moments when what seemed complicated seems a bit clearer. A lot of Christians like to criticise postmodernism, but if you look at the three-pronged approach to pastoral care (using all of the above tools) that Doehring recommends, it seems like a very appropriate and logical tool-kit.

So, my question is: if postmodernism is so threatening to Christian theology, is the claim therefore that God can only be found in 'the objective' (ISTM the premodern and modern contexts) and that there is no such thing as the presence of God in the subjective? It seems to me that to make such a claim would be ridiculous. It also seems to me that 'the presence of God in the subjective' is, to some extend, the old idea of having a personal relationship with God.

I'm trying to work this out in my own mind, so pardon me if this is too much of an incoherent ramble.
Posted by PamBG at 9:40 pm 6 comments:

Women leaders don't have what it takes

This article in yesterday's New York Times (hat tip to Cecilia) informs us that that women simply don't have what it takes to be leaders. So says research by Catalyst, an organisation that that studies women in the workplace.

Hmm, so Norwegian women can inspire and American and British Women can delegate, but all women are missing that 'it factor' that it takes to be a good leader. Just so I understand that correctly; being a woman, it takes me a bit longer to understand things.

And I doubt this will come as a surprise to any of my sisters: