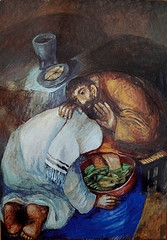 The topic of sin has been on my mind recently and I thought it might be good to blog about it.
I suspect that both friends and foes (as well as friendly foes) might be surprised to hear that I believe that God hates sin.
However, I suspect that no one will be surprised to hear that I believe that God loves sinners.  Not just because that latter idea conforms to what you probably already think of my views.  But also because "God loves sinners" is a deeply Methodist doctrine.  A Methodist emphasis (although not a distinctive) is that we hold the concept of prevenient grace dear to our hearts.  In plain English, this means we believe God wishes to be in relationship with all people who have ever lived.
However, that doesn't mean that God likes sin.  On the contrary, sin is what keeps us alienated from God rather than in relationship with God, so it's a no-brainer that God hates sin.  So, yes, God hates sin.
It's not actually so much the concept of "sin" that worries me.  It's the concept of "hate".
What do you think of when you hear the word "hate"?   Each individual will probably hear differently.
When someone says "I hate it when I ask you to do something and you ignore me" do you hear the other person simply saying "I'm coming here today with a totally neutral request to ask you to change your behavior" or do you hear some negative emotion behind that?
Now, let me ask you another question.
How do you think that someone who has been physically abused by a family member would hear that sentence?  How do you think that someone who has been sexually abused by someone bigger and stronger would hear that?  How do you think that someone who has been emotionally abused by someone close to them would hear that?
What do you think that someone who has been abused hears when they hear the word "hate"?  What do you think they hear when they hear "God hates"?
And what's the relevance of my question?  Well, social scientists believe that at least 33% of women have been abused by someone close to them during their lifetimes and that at least 25% of men have also been similarly abused.  Social scientists also suspect that these numbers may be under-reported.
So, as Christians, do we really want to send the message that "God hates something or someone or even some action" to the 33% of the population who is hurting and most in need of healing?
I can hear some people now objecting that this is the sort of thinking that has led to the wishy-washy, anything-goes abandonment of values that got the world into trouble in the first place.  I think we can take a stance against sin without preaching "God hates" (behaviors or people) and I intend to address that in my next post.
I'm going to suggest that both sides of this question are at fault:  both the law-and-order advocates as well as the advocates of passivity.  The problem is not that God loves sinners or that God hates sin.
The problem is that human beings engage in black-and-white thinking and behave in reactionary ways.  Christianity is supposed to encourage wisdom, among other things, so I think it's the duty of Christian teachers to point to wiser ways of behaving.  Wiser than "That's OK, let's not have any rules or boundaries" and wiser than "If we make God look like a Tough Guy, people will be too afraid to sin."

Very interesting Pam. The word hate is a powerful word. I think the word deplores or disaproves of can be used in the human vocabularly rather than hate. I aslo think the Lord sees us as deplorable children doing wicked things. He disaproves of our ways, which are self-centered not God centered. Look forward to your next blog on this subject.

Is there really a difference between "deplore" and "hate"?

God hates many of our actions, inactions, thoughts and desires. That doesn't make Him any less open to our attempts to be more Christ-like.

I worry about discussions of abuse that seem to define every relationship with any unhealthy moments as abusive. There are plenty of times that my relationship with my father is dysfunctional, but compared to those who are physically or sexually abused or deeply emotionally damaged by their parents, mine is almost idyllic. I would feel that I was insulting and insensitive to those in truly abusive relationships if I tried to equate them.

Maybe your next post will clarify these things. Our Methodist identity needs to be more than simply a refuge for Catholics and Southern Baptists who had unhappy experiences in their former churches.

Creed, I'm not entirely certain what point you're trying to make here?

We both agree that God hates sin. It sounds like you are convinced that the 33% figure is based on bogus claims and therefore, preachers shouldn't worry about alienating this population?

Our Methodist identity needs to be more than simply a refuge for Catholics and Southern Baptists who had unhappy experiences in their former churches.

We started out as a refuge for people with "unhappy" experiences in the Church of England. As in, Calvinist Anglicanism told them that their status as the poorest of the poor was physical proof that they were damned.

We can't go back and replicate these sociological factors. We can continue to proclaim the central Methodist tenet of prevenient grace. Something that British Methodism never lost and that I'm beginning to think that American Methodism may never have had in its enthusiasm to copy conservative evangelicalism.