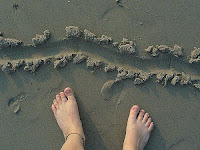 I was born in 1957.  A year that, I am led to believe, was the peak year of the Baby Boom in the US.
Theologically, I think that my generation has a lot to answer for.  We were the babies born (in the US) at the height of post WWII affluence.  Not only were we looking forward to a level of economic prosperity that our parents - who grew up in the depression - only dreamed of, but we were also quick to throw off the shackles of institutionalism, bureaucracy and rigid social expectations.
Many of us, myself included, were raised in religious environments that emphasized how sinful and bad we were.  My stock joke - which really isn't all that funny - is that as a kid I thought the Gospel message was "Jesus died for your sins, so the Father has to let you into heaven.  However the Father is absolutely livid that He's been bribed like that because He hates you."
In reaction to this sort of theology, my generation responded in two ways.  Firstly, many simply left the Church and Christianity entirely.  Secondly, many of us adopted a theology of "cheap grace" - which I outlined in my previous post.  Briefly, "cheap grace" means that we give people the impression that just because God wants to forgive everyone (who repents properly), that God will forgive everyone regardless of whether they are sorry and regardless of whether or not they want to repent.
Another way of saying "cheap grace" is "no boundaries".
I like the "no boundaries" way of looking at the problem of sin because it brings the problem of sin and cheap grace quickly into focus.
My generation often behaved as if boundaries didn't matter and we often didn't teach boundaries to our children.  No wonder the next generation is reacting in the opposite direction:  boundaries galore, including a lot of boundaries that make the love of God too narrow.
Human beings have a way of doing this.  Black-and-white thinking and jumping from one extreme to another.  If the boundaries I had were too rigid, then do away with them altogether.  If the boundaries you had were non-existent, then put in some rigid boundaries so that everyone knows where they stand.  If the punishment I received was too harsh, never punish anyone for anything.  If no one seemed to care what you did, then impose strong punishments so that the values you're upholding have meaning.
Some wise common-sense thinking will quickly help us realize that there is a more central position:  boundaries which maintain the values of love of God and love of neighbor which are enforced consistently and lovingly.
For the most part, it seems to me that that is the witness of Scripture about Jesus' behavior.  OK, yes, he knocked over the tables in the Temple once.  But in many stories, Jesus forgave the sins of an individual with compassionate understanding, warned the person to truly repent and to not repeat the sin and sometimes even healed them.
Generally speaking, having and enforcing boundaries does not require harshness on the part of the enforcer, it requires mainly consistency of enforcement.  Preaching about how much God hates us when we breech the boundaries isn't going to result in better behavior, it's going to result in a character-assassination of God, not to mention bad theology (God doesn't hate us).  Making up a lot of zealous boundaries like "God wants women to be subservient to men" or "God hates LGBT people" or "God will cast you out if you believe in evolution" doesn't result in better boundaries, it simply perpetuates bad theology.
Yes, sin is bad.  Yes, sin damages us. Sin can keep us in hell.  Sin estranges us from God.
The solution is good boundaries born from wise theology.  The solution is consistent enforcement of those boundaries.  The solution is compassionate, mature enforcement of boundaries.

Thank you for this interesting post, Pam. As I am not a Christian, maybe I don't have a right to comment; but if you will permit me, it does seem that a lot of the problems of the theory of sin stem from the lack of a sense of proportion. As you say, people are too ready to jump from one extreme to the other. A doctrine that mandates the same hellfire for wanting a nice toy as for killing ten people has no place in a fair and reasonable world.

I agree with you, Ric! And, unfortunately, one will still hear preachers preaching this sort of thing. Makes me wondering what they're hiding and what they're projecting on to other people.