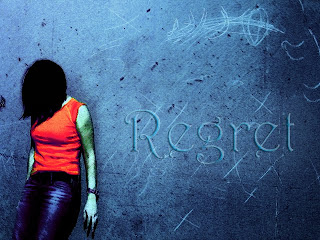 I love how God sometimes gives us gifts out of the blue. A gift that a friend and I received a few months ago came in a mutual conversation where we determined that the emotion she was experiencing was the emotion of regret.

Here are a couple of examples of regret.

A woman leaves home very early in the morning for her early-start job. Her disabled husband is asleep, as usual, and she decides not to wake him up. Later in the day, she learns that he had a stroke in the middle of the night and she is wracked with guilt. If only she had tried to wake him up at 5:00 am, she would have realized that he was unconscious and called an ambulance.

In my opinion, both of these situations are examples of regret. They are also situations where our culture is often more accustomed to reaching for the describers of "guilt" (in the first instance) or guilt's opposite number "blame" (in the second instance).

What's the difference between guilt/blame and regret?

The purpose of guilt is to alert us human beings to the fact that there is a moral or ethical choice for which we have a responsibility.

So, in the first example, if the woman had tried to rouse her husband, found him unconscious and then shrugged her shoulders and decided to go off to work anyway, then she should feel very guilty indeed; she had a moral responsibility to her husband's well-being that she abdicated.

Why is it important to understand the difference between regret and guilt/blame? Because if we understand the difference, we have a method of moral discernment. We will know how to avoid blaming people (ourselves or others) who didn't actually act unethically or immorally. We also have a process of discerning when someone does actually need to be blamed and when an action needs to be named as wrong.

I am pondering regret and guilt.

Let me know the results of your pondering.

Thank you for this, it makes so much sense. And so often other people try to guilt for situations which are regrettable, where only hindsight can show that it was not the best decision

Bravo, Pam! As a philosophy professor, I love the way you handled this subject. A couple thousand years ago, Plato and Aristotle demonstrated the importance of defining our terms and carefully distinguishing the differences between words and how we use them. What you've done here is along that same line. "Regret" and "guilt" aren't just words--they express states of mind that are emotionally-charged, and we hurt ourselves and others when we use them inappropriately. The distinction you make here must certainly be valuable in your work as a chaplain, but it can equip all of us, as you say, to make sound moral judgments. Thanks for sharing this.

Lynne, glad it was helpful. Ron - yikes! If I'd known a philosophy professor was going to be reading, I'd never have opened my big mouth, but thanks for the compliment!

I doubt that, Pam. I watched you stand your ground quite nicely at the Methodist Preacher site earlier this week. After that, I find it hard to believe you'd be intimidated by a harmless philosophy professor!

So you feel "regret" at withering away over the past forty years, along with the rest of Mainline Protestantism; you feel "guilt" that your church remains about as interesting as curling?

I'd venture to say, anonymous, that I probably have less regrets about my life than you do since I have the guts to identify myself and I don't run around the internet making gratuitously negative comments to folks I don't know. Or does that work for you?